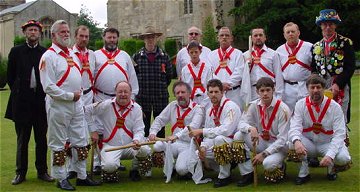 Stanton Harcourt (Oxon.) is a small village dating from a Bronze Age settlement 12 miles north of Wantage, 5 miles west of Oxford and more significantly (in Morris terms) 2 miles south of Eynsham, a scene of more intense historical Morris activity.  The village is noted as the home of the Harcourt family at the Manor from 12th-18thC (and now back in residence after a couple of centuries in Nuneham Courtney).

The Harcourts are the only surviving family of the Norman Conquest in Oxfordshire. The Norman church contains the tomb of Robert Harcourt, Henry Tudor's standard bearer at Bosworth Field (1485). The remains of the standard hang above his tomb. The whole village has a feel of feudal England about it, but the accessible history of Morris dancing in the area principally concerns the hamlet of Sutton to the north of the manorial estate.

Our knowledge of historical Morris activity in Stanton comes from 2 documents; Percy Manning's account in 'Folklore' (Seasons) 11, and a manuscript dated ca.1920 ascribed to Arthur? Williams. Manning was an Oxfordshire folklorist who, amongst other things, encouraged the revival of the Morris in Headington, which was the team Sharp saw in 1899.  What followed became history.

Manning paid a retired geologist/fossil collector Thomas Carter as a researcher.  Carter interviewed, Joseph Goodlake, an old Stanton Harcourt dancer. Just 4 months after the recorded date of that interview he died from the Morris dancers curse (cirrhosis of the liver).

Joseph Goodlake's account to Carter/Manning listed 10 dances for which he only described the chorus (Distinctive Figure - DF) for 7. These were 5 stick dances and 2 clap dances. This is highly unusual for this region surrounded by handkerchief only traditions; sticks appeared to have only become incorporated into Morris dancing from the late 18th - early 19thC. Bearing this in mind, along with the hypothesis for the commercial motivation for the Morris, it is possible that Stanton Harcourt dances were contrived in mid 19thC without any historical development; this would account for the contrast with surrounding styles.

From general Morris evolutionary features we might expect any older Stanton Harcourt dances to use handkerchiefs but the only notation for a handkerchief dance comes from Williams' manuscript. The music would have been pipe and tabor and possibly fiddle later on.

Nothing further is known concerning where and when the Morris would have been danced in Stanton Harcourt.  The Stanton Harcourt dances seen these days is principally the reconstruction of Roy Dommett who held instructionals on his interpretation of the Manning and Williams notes in the 70's.   The Icknield Way Morris Men continued it from there via our late foreman, Joe Marns.

Dances Performed by Our Side

Care of the Tradition

The Stanton Harcourt tradition is currently under the care of the Side.  We offer demonstrations and instructionals. Full details of this tradition are FREELY available as a PDF File (232kB).