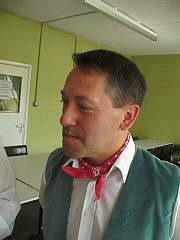 Ray started dancing with the Side in about 1982 after a chance meeting with Joe Marns through folk dancing. Ray was born in Leicestershire but thinks of Oxfordshire as his homeland. He was a submariner with the Royal Navy (Lt. Cmdr.) for 10 years, before joining the Harwell laboratory to look after some of its reactors.  Ray was Scrapman for more than 10 years and most of the pictures in our books during this period are due to him. He left the side in 1998 to take up a post in Australia where he bacme an avid reader of this web site to keep in touch.

He has since rejoined the side following his return to the UK and has one more become Bagman to great effect.