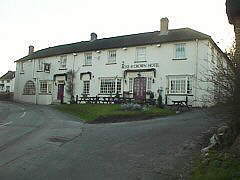 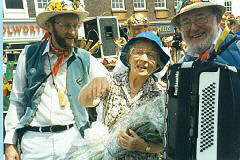 Morris Dancing in Wantage and the Vale

The Vale certainly joined in the Elizabethan performances of the Morris. The Churchwardens Accounts and records of the day refer to items of Morris regalia in Wantage (1565), Didcot (1580), and Stanford-in-the-Vale (1607). The Wantage records reveal Church Ales, Whitsun Ales and Whitsuntide Sport(es) from 1581 to 1623 and payment to 'our minstrelles for there bord'. In 1565, 16d was paid for 'a dasson morys belles' and in 1590, 'lyveries' (costumes) were provided by John Eshmond for 4s 6d.

The Wantage 'taberer' was John Rowland who was paid 17s 6d for playing tunes at Whitsuntide as a young man.  He died in 1635 but music was also provided on fiddle by Richard Kimber (d. 1651). The original dancing area may have been a plot of land near Limborough called 'dauncing more' belonging to William Talbott. The Maypole ('somner pole') is referred to in 1611 and 1625; this may have been on a recreation area (now Broadway Motors) at the end of Garston Lane.  A 'garston' was a field set aside for rejoicings, May festivals and maypoles.

The last maypole in the Vale remained at Longcot. One November in the early 1800's it was stolen by men from Ashbury and erected outside The Crown Inn (now the Rose & Crown) ... 'reaching high above the rooftops'. It was then stolen by Uffington men and a subsequent threat from Lambourne ensued. Parson Watts of Uffington ended the episode by cutting the maypole into logs for the poor.

Wantage held fairs of national renown. When the spread of plague became a serious problem, Charles II issued a special proclamation in 1665 'prohibiting the holding of the Faire at Wanting or Wantage in the County of Berks'.  The fair attracted people from all over the country.  Apart from this interruption there have been (and still are) 3 fair days in Wantage since the Fitzwarin family in the 13thC.

The next reference to the Morris locally is in 1885 when the Morris was danced by 'laddes of ye Royal Burgh of Wantage' before the sports began at Lockinge House in the  'Festival of ye Summer Quene'. This was an Elizabethan pageant recreated by D'Arcy Ferris (of Bideford fame).  Nothing is known concerning the side who danced, but the dance was referred to Sharp in 1910.

The festivities in Wantage did not endure as successfully as those in Abingdon and there are no records of any any Wantage variations of the Morris dance. The Side would be very interested to learn of any other information in relation to this.

A Revival of Interest

In the 1950's Miss Mary Shunn, a teacher at Icknield Secondary Modern School introduced Morris dancing into the school curriculum as a part of the Duke of Edinburgh award that the boys were doing. She had been a close friend of William Kimber, musician and instructor of Headington Quarry, and had danced with the side during the Second World War when the men were away fighting.

In 1958/59 when the boys left school they continued to dance the Morris. They danced in private for several years with their first public season in 1965. The Side were invited to dance at the 100th meeting of The Morris Ring in Oxford and became full members in 1974.

The team emblem is the old Icknield School Wessex Wyvern, the symbol of the Kings of Wessex, the most famous of whom was Alfred the Great born in Wantage in 849. Over the years the Side has used different styles of wyverns. In the beginning all the wyverns were standard, then for several years each member made their own wyvern with its own character. In our 50th year we standardised the wyvern again. Illustrated below is the original wyvern used 50 years ago and the current wyvern. See more information on the Evolution of the Wyverns.