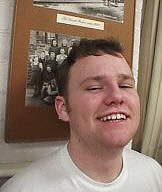 Michael McArdle
It is always a sad occasion whenever the Side loses a member, but the sadness is never so great as when they have died so tragically and so young.

Michael (21), who died in a rail line accident on 3rd October 1999, was the only member of The Side to be born in a traditional Morris location (Eynsham) before moving to Wantage.  Like David Andrews, Michael was one of the youngest, permanent members of The Side.  He was trained from the age of 7 by Phil Carmichael, and had more than 15 years dancing experience. He began dancing with The Side in 1989.

He produced powerful, vigorous and usually faultless performances.  His memory for dance traditions was good and never failed to amaze many in The Side with his ability to recall the most obscure of dances.  He always had a smile on his face and will always be remembered for his dynamic performances of the Bampton two-man jig, Princess Royal, with David Andrews.