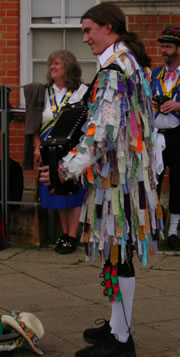 Matt first got into the Morris from a young age, when he and his dad used to watch Kennet Morris Men on New Year’s Day. He can remember when he was ten years old watching Pat Keeley (of KMM) and saying, “Dad, I want a melodeon”. Four years later he bought his very first melodeon. Later that year Matt joined the Kennet Morris Men as a musician.

After two years with Kennet, Matt decided to seek another side so he could learn to dance with a different team (and because one side wasn’t enough). Finally after searching around he discovered that Clive Blunt of Kennet was also a member of Icknield Way. So in 2006 Matt came along to a practice and has stayed ever since.

However, due to his lack of a Driving License and relying on a lift from Clive, Matt hasn’t been able to get out with The Side as much as he would like to. But as soon as he passes his test he hopes to come out as much as possible.

Matt is an accomplished musician, with the Morris he mainly plays the melodeon (on which is often found improvising during a session). But he also plays many other instruments including the keyboard, guitar, bass and mandolin to name but a few. Matt has a few party piece tunes that he likes to crack out every so often in a session, including his American Set which is known for causing Kennet to sing along.