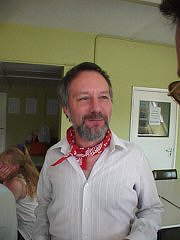 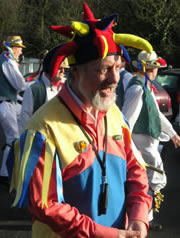 Jim became a Morrisman in 1971 with the Men of Sweyn's Ey where he danced both Cotswold and Rapper. He recalls that it was quite common when queuing for lunch in the university refectory to hear other diners practising "step - shuffles" on the tile floor.

Jim joined Icknield Way in 1977 and danced regularly, and performed with the Mummers, until 1986. Work, family duties and laziness then intervened and it was only after appearing as an Old Boy at the 40th anniversary celebration that he re-joined in 2000.

Unlike the rest of the multi-talented men Jim is neither a good singer nor a player and, having twice been a squire, intended to evade all forms of responsibility for the rest of his Morris career. Alas, Jim did not succeed and became Squire again from 2004-2006. He is currently scrapman of The Side.