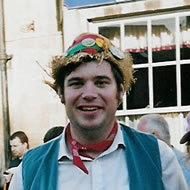 Alastair joined Kennet Morris Men’s Boys Side (led by Clive Blunt,) in 1985 and has been dancing ever since. He continued to dance along side his Dad at Kennet until his departure to Loughborough University where he joined Man Friday and Anstey Morris Men. During an industrial placement year in Doncaster he joined Green Oak
Morris Men.

Having completed a degree in Transport Mismanagement and Friday Night Philosophy Alastair has returned to the South to work for Network Rail. He continued to dance with Kennet and joined Icknield Way during 2003. In
2004 a job offer took him up to Leeds but he is still able to support many of the Side's events.

Alastair claims to be able to: Tame the Tin Whistle, Mime with a Melodeon and Amuse the African Drum (that cost a mere 10,000 schillings at the Ugandan Equator!)