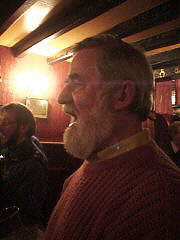 It is with sadness that we report that Nick died on April 19th 2006 after a long illness. His voice and moving songs will be missed.

Further details in the Guardian Obituaries.

In 1949, whilst still a student, Nick joined the Cambridge Travelling Morris for a period of 2 years, touring Suffolk, Derbyshire and the Cotswolds.  After a gap of more than 40 years, he joined the Icknield Way Morris Men in 1993. A performance by The Side at The Folly in Faringdon rekindled his passion for `the dance'. Why did he do it? Because he liked the dancing and the music.

Nick had a powerful singing voice, and a repertoire of passionate and moving songs. Indeed, it was one of these songs that helped make this Webmaster think of coming back to the Morris.