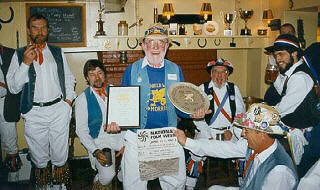 In the Vale of White Horse there's a man they all know,
For his music in pubs and in barns;
He taught us the dances we have in our show,
We're dancing for Jolly Joe Marns

The history of the Morris is illustrated with characters whose enthusiasm and dedication made them the keystone which ensured the longevity and success of a team over decades, despite the comings and goings of the rank and file members. Charles Benfield, Sam Bennett, and William Wells represent the more famous examples of this.  For the Morris in Wantage and the Vale of White Horse, Joe Marns was such a man.  His sudden death on 13th January 1998 left the Vale mourning one of its best loved public characters, known throughout the region for his music and community activities.

Joe joined Icknield Way Morris Men during National Folk Week in 1967 and quickly learnt the tunes and dances from their mentor Mary Shunn. Although she was the motivator behind the team and a friend of the Kimber family, she kept behind the scenes believing the performance to be men's business.

Joe instantly became the main musician and through attending instructionals given by Messrs Dommett and Reynolds in the '70's soon became Foreman as well.  He remained Foreman for 20 years, was squire from 1986 - 1988 and Chief Musician until 13th January.  In May 1997, in a joint celebration with our friends from Oxford City Morris Men, he was elected to a specially created position of Life President, a post we thought had at least another 10 years to run.

Joe was famous locally as the man with the accordion who played for charity and twinning events, parties, pubs, and barn dances. He was an accomplished musician who also played violin and viola with the Didcot and Wantage Orchestras for over 20 years, as well as playing piano, pipe and tabor on other occasions. He also had his own dance band, 'The Waylanders', who played for numerous country dances throughout Oxfordshire over a period of 14 years, with Joe calling the dances.

Joe was well known for his community work and was a Labour councillor on the Wantage UDC for 4 years in the early 70's as well as being a Governor of Stockham School.

He was involved in many charity activities, most recently providing weekly entertainment at the Wantage October Club and helping with the Community Information Centre.  Amazingly he also found time to be a keen supporter of the Oxford and District Esperanto Society  of which he was a member since 1983, and was an enthusiastic organic gardener in his younger days.

Born in London's East End in 1925,  Joe lived next door to a neighbour in Joseph Street who paid a shilling for accordion lessons. Crafty Joe then paid his neighbour sixpence to pass the information on to him. He taught himself to read music at the age of 12 from borrowed books and at 14 played in his first band in Bow.

After gaining a degree in radio engineering at the Northern Polytechnic he served for three years in the Navy.  He married his beloved Christine in 1953 after meeting at the French Society. In the late 50's the family moved from Portsmouth to Wantage following Joe's appointment as Deputy Librarian at the Atomic Energy Research Establishment, Harwell where he spent the remainder of his professional life.

For Icknield Way Morris Men he will always be remembered as 'The Guv'nor' who , despite the emergence of other musicians and instructors, was always looked to for the final word.  His humanist funeral service in Headington was attended by representatives from Oxford City, Bampton, Ancient Men, Abingdon, Charlbury, St. Alban's and Whitchurch teams, as well as Icknield Way past and present.

Joe was revered and respected by all who met him and especially by his family and fellow musicians.  He is survived by his son Christopher, daughter and son-in-law Sue and Ian; and three Granddaughters.  He was a truly remarkable man who will be greatly missed in Oxfordshire and by all who knew him.