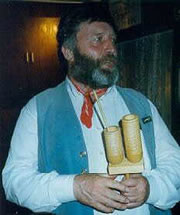 Bob was one of the founder members of The Side. He began at the age of 14, and was taught by Mary Shunn.  Wantage was a very quiet place when Bob was a lad, with very little for youngsters to do.  So, they decided to make their own entertainment and approached Mary Shunn for help in forming a Morris Team.

Bob eventually went on to become the Life President of The Side.  Bob will, however, be remembered by many of us for two things.  Namely, his very powerful singing voice and his infectious laugh whenever he found something truly funny, which had the capacity to take the rest of us along that journey too.