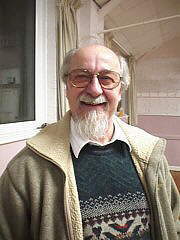 Geoff Smith was introduced to Morris through Pete Ambidge, and the late Brian Cooper, who essentially got him drunk and press ganged him into The Side.  The catalyst for this proved to be a group of visiting Austrian and Norwegian Folk dancers that were performing at Dow Chemicals' research laboratory in Letcombe Regis.  Puzzled by the fact that they did not appear to drink anything offered to them, he asked their leader for an explanation. `We are here to dance, not to drink', was the reply. Nevertheless, they invited him back for a post dance party where he met Pete Ambidge and Brian Cooper who introduced him to the Morris way.

After 2 months of practice, his debut was in Great Ash Forest on the estate of Sir Julian Rose, to the background smells of spit-roasted meat and the seemingly endless supplies of flowing ale. Somehow reminiscent of the Wychwood Whit Hunt, Forest Fairs and Ales.

Geoff had been both an active Bagman, for no less than 6 years, and Squire.  Whilst Bagman, Geoff was pro-active in arranging week-ends away and raising the profile of The Side. He will be sadly missed and his contribution to the Side will not br forgotten.