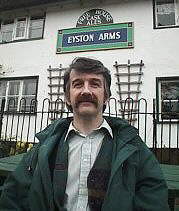 Richard is one of the longest serving members of The Side, having danced since 1982.   After a period of secondment with another side, Richard has now returned to the fold. Compared with most, Richard's path to the Morris is unusual; no Ales, no Folk. One Summers' day, he witnessed a fine performance outside a Surrey pub where family members were evidently giving keen support. Richard thought that this was a great way for a family to spend a lunchtime, and his enthusiasm grew.

Richard's devotion to The Side was shown through his role as Bagman for 5 years (1984-87 and 1994-96).  He is also a keen supporter of the Wantage Mummers, having performed for 16 consecutive years, and a fervent believer in the charity aspect from such performances.

Richards claim to fame is the introduction of Ladies Night.