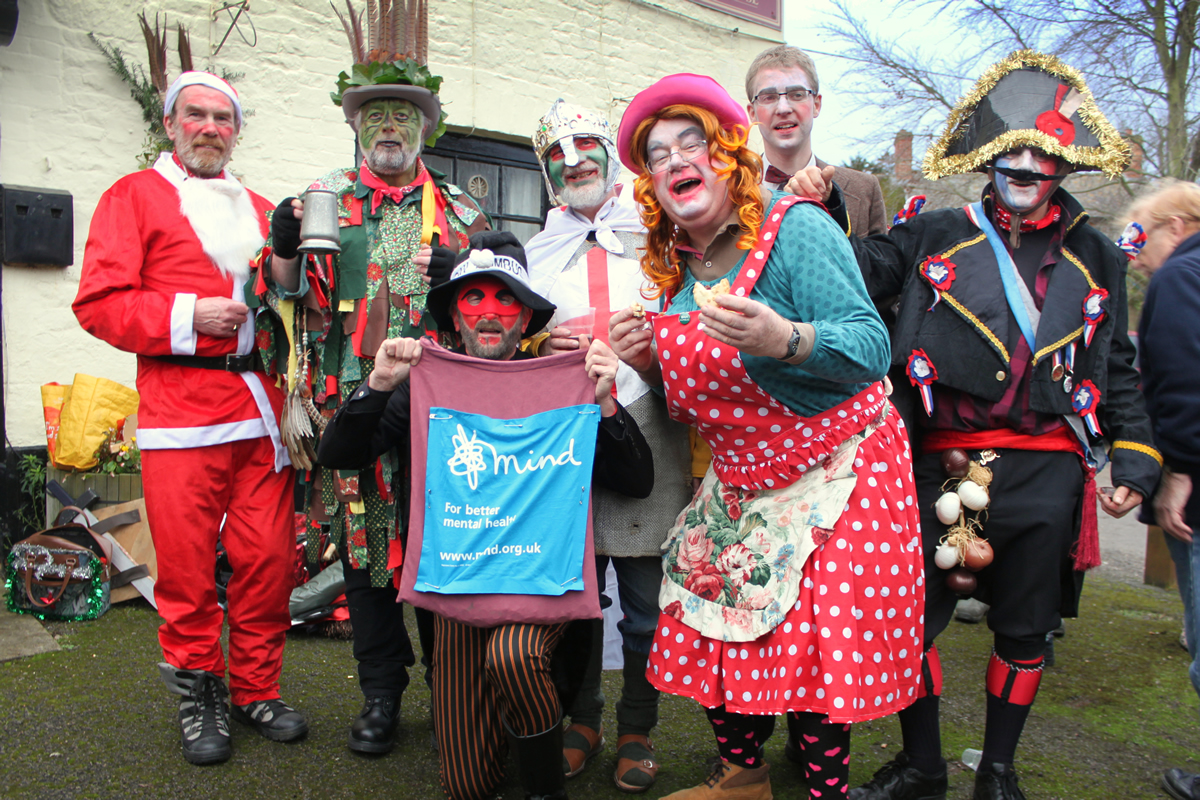 Mummers Plays, or Mumming, are ritualistic performances that might be well over a thousand years old. They are traditionally associated with the Christmas period (Midwinter Solstice). In other parts of the country they are performed at Easter (Pace Egging) and at All Souls Day near Samhain (Soulers).

Mummers plays at one time were thought to be linked with pagan rites showing the triumph of life over death (death and resurrection), good over evil. It is now fairly certain that the type of mummers play popular today did not exist before mid-18th C.  Medieval references to Mummers Plays refer to a different type of masked play (Mystery or Miracle plays with a religious basis).  Roving groups of players were certainly the stuff of ancient history but it has not proved possible at present to link the current plays with these groups.

Ronald Hutton (The Stations of the Sun: History of the Ritual Year in Britain) refers to a chapbook published mid 18thC, containing the full text intended for groups seeking to perform a play around Christmas time.  Four lines from this play appeared in a version performed in Exeter in 1738, but the “silence” prior to this speaks volumes, since other folk customs (e.g. Morris dancing) fully populate the folk custom records for a considerable number of years prior to this.  The absence of a recorded referral to this type of play before 1738 almost certainly confirms its non-existence.

The word 'Mummer' is thought to come from the German 'Mummerspiel', meaning 'Masked Play' or Masquerade. In their present form the plays probably date from the mid 18thC although nothing was often written down (as with most folk traditions). They were common in 18/19thC with numerous villages hosting a version of the standard format.

Although the characters and plots vary across the country there are more similarities than differences in the many plays collected and it is almost certain that there was a common origin.  Because participants were largely illiterate the verbal transmission of the plays from generation to generation ((and sometimes kept within families) led to many differences in words and characters evolving; e.g. in Headington the Turkish Knight is known as The Turkey Snite.

The absence of formal script meant much ad libbing and working in of topical events. Maintaining anonymity of the players seemed to be a key feature and the costumes frequently covered the performers faces or they wore blacking. This may have been to preserve the mystique of the performance or to give the players more freedom of expression. Whatever the origins, villagers thought it bad luck if they could identify a performer.

The play, introduced by Molly, involves a fight scene in which first King Alfred is 'killed' by Beau Slasher. After being brought back to life by the The Noble Dr Good, the two fight again.  This time it is the turn of Beau Slasher to die. He too is brought back to life by Jack Vinney who celebrate with a dance.  Happy Jack then appears proclaiming his poverty and family to support and begging for money.  Traditionally agricultural workers doing the Mumming play could make two weeks wages from 2 days performance of the play!  Over the past 20 years Wantage Mummers have donated almost £20,000 to a wide range of local and national charities. The play rounds off with a monologue from Old Father Beelzebub, who comments on the issues of the day, and ends with the Mummers Dance.

The Wantage Mummers play has been performed since the early seventies and is a typical mid-Berkshire/Oxfordshire mummer’s play of the hero-combat type, based on an old tradition from the nearby village of Steventon that was resurrected by Max Williams, a former Old Boy of the Icknield Way Morris Men who currently sponsor the Wantage Mummers.

There is now a new web site for the Wantage Mummers:
https://www.wantagemummers.org.uk

God bless the master of this house
I hopes he is within
An if he is, praay tell us zo
An we will zoon begin