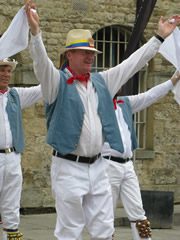 David started playing guitar and whistle (not at the same time) at the local folk sessions in 2009. Unfortunately the local sessions are the hunting ground of the plain clothes morris man and in autumn 2010 he was press-ganged in to the Icknield Way Morris Men. Despite various attempts at escape he has remained a prisoner ever since and is routinely forced to dance in a silly costume and drink beer in copious quantities. His wife misses him dearly and has started a poster campaign in an attempt to find his whereabouts.