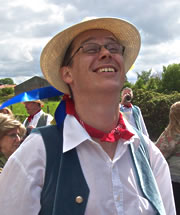 After meeting some of the Icknield Way men at local folk music
sessions, Rob joined up in 2007, quickly progressing to become one of
the tallest members of the team. He alternates between having quite a
lot of hair and hardly any, and hopes that, with practice, he will
eventually know more dances than he did before he joined.

It is likely that Rob has more musical instruments than any other
member of the team (but he is willing to be corrected on this). This
does not imply that he is a talented multi-instrumentalist like some
of the others but rather that he has an awful lot of harmonicas.