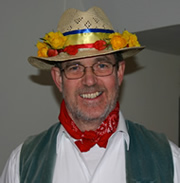 Having been amused by Morris Dancers for many years and threatened to take it up in retirement, Ben was on holiday in Cornwall when Trigg Morris turned up at the local pub. Their set ended with a 'come all ye'. Emboldened by having helped finish the barrel of Marston's Pedigree left over from the beer festival he joined in and decided that leaving it until retirement might be too long - why wait? An internet search found his nearest side and he began as an 'Icknield' man.

Ben has no background in folk but has been a choral singer in various choirs most of his life, with a strong preference for unaccompanied Renaissance music. The age and history of the morris tradition appeals, too. His mother was born in Fieldtown and he grew up within cycling distance of both Ducklington and Stanton Harcourt: the challenge of learning to dance has left him thinking that there is unlikely to be any inherited ability.

Ben says that waiting until he was 60 before taking up the Morris was his first mistake, although he has made plenty more since. But the fun and company more than makes up for it!