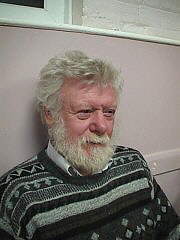 Keith Elmore joined Bedford Morris Men in 1947 but after 2 years was called up for National Service.  He later pursued rowing and athletics but did not return to Morris again until joining The Side in 1993.  Keith's interest in the Morris is a spin-off from his Folk interests.

Department of Shrivenham College of Military Science makes him appreciative of conserving energy through careful pacing.