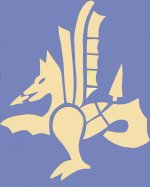 Evolution of the Wyverns

The team emblem is the old Icknield School Wessex Wyvern, the symbol of the Kings of Wessex, the most famous of whom was Alfred the Great born in Wantage in 849. Over the years the Side has used different styles of Wyverns. In the beginning all the Wyverns were standard, then for several years each member made their own Wyvern with its own character. In our 50th year we standardised the Wyvern again. Illustrated below is the original Wyvern used 50 years ago and the current Wyvern.