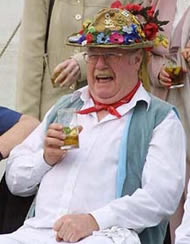 Martin joined The Side in 1991, as a natural progression from Folk. At one stage he almost joined Abingdon Traditional Morris Men, but  the hand of fate, acting through former Old Boy Steve Agnew, brought him to us instead.

Martin is a keen musician, though not necessarily for the Morris, playing mandolin, guitar, bones and even beer glasses. In his `spare' time Martin also enjoys playing on guitar at ceilidhs.

Very much the extrovert of The Side, Martin always appears to be at the centre of whatever is going on, and contributes the odd rustic song or two.