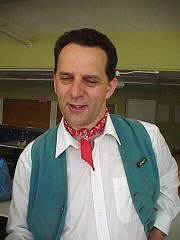 Adam began dancing the Morris in 1984 after a suggestion by Richard Browning that it would be good for him. He was so impressed that he persuaded Steve Dagnall to join.  In the early days, lunchtimes at work were taken up with practising the stepping. Adam could always be called on to sing and has a good repertoir of unusual songs.

Adam returned to The Side after a sabbatical of some 11 years; but has since left again following his emigration to France.