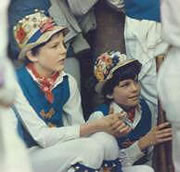 Jason (right), Brian O'Rourke's youngest son, joined the side at the age of 7.  He was a very good dancer and also learned to play the Melodeon.  He has since moved to Ireland, where he teamed up with Ruadhrai O'Kane, and is extremely well known in the folk scene where he plays a Jeffries concertina.